Ladies and gentlemen, from the flight deck. Somebody put our engine in upside down, and there’s only one tool in our galaxy that can fix this … and it’s in Madagascar. Apologies for the delay.

But we’ve all been there. Sitting in the airport when you get the announcement or phone notification that your flight has been delayed 1, 2, 6 hours. What to do? If you’re like me, you’re faced with several options. I usually decide to be less unhealthy and use the ‘opportunity’ to get some Fitbit steps in. That usually lasts no more than 30 minutes as I grow weary of dodging people either walking at a zombie pace staring at their phones with zombie face or the people late for flights doing the OJ Simpson thing through the airport. (This OJ thing, not the other one.) I could peruse the shops in the airport and buy something that I don’t need at 8 times the price I could get it at home. But I want to do most is to saddle up at a watering hole and have a good local beer.  I don’t mean some sports bar that only serves mass-produced national stuff through questionable keg lines. I want to find somewhere that serves a good pint of local beer.

During my most recent flying-home-experience, I found myself with 6 (yes, six) hours in the airport, trying to get home from DC. (Note: I do not recommend drinking for 6 hours before flying home. For about 37 reasons.) But the delay made me think. I did the Google-thing to find the best places to get local beer in airports, but I could not find a good list. There were lists per city, or the top 7-9-10 places to get a drink. But there wasn’t a single good list.

So, here is my first stab (no, not another OJ reference) at a good list. PLEASE comment below with your suggestions.

The Skinny Pancake (past security – both concourses)

Cheers! Here’s hoping you’re delayed in one of these airports soon. Wait … that didn’t come out right. You know what I mean. 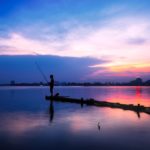 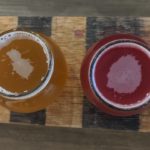