BOTW – a Rare One

This is a beer that I probably NEVER would have bought on my own.  Lesson learned – this is simply awesome, while not being simple.  If you can find it (it’s a very limited release), buy it. 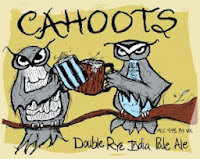 As I alluded to a few weeks ago, I’m talking today about Uinta Cahoots Double Rye IPA (pronounced You-Enta, just like it looks).  I am not super into IPAs usually.  And I find that I don’t tend to like those that have a bitter taste – just not my thing.  I have learned to appreciate them more and more through the years, particularly the high-quality stuff that Dogfish Head puts out.  That being said, I was a bit nervous about trying something that was a “Double Rye IPA.”  This was a 40 Days of Beer Delivery (thank you, WWK) and was something that I was honestly avoiding.

I had had a rough day (aka ‘week’) at work and finally thought, “It’s time.  Even if I hate it, it’s 9.4% ABV and will help salve the wounds of the work week.”  I got out my trusty frozen mug and poured the elixir into the awaiting receptacle. I can only describe the color as a deep amber, almost like a copper.  I steeled myself and dove in with my first sip.  Surprise does not begin to describe my emotions.  Elation is probably closer.  I had been avoiding this 750 mL delight for what reason?  My own trepidation.  Where I was expecting a harsh, bitter flavor, I had sharpness.  Hard to describe what I mean by that – it wasn’t necessarily a smooth texture.  But by sharp, I don’t not mean harsh or bitter at all.  It had a caramel-type flavor to it and I was completely floored.  And the alcohol almost gave a warmth to the beer.  Quoting Frank the Tank, “Once it hits your lips, it’s so good!”  Expecting the worst and receiving the best.  I’m now just disappointed that I didn’t try it sooner!

Lesson learned.  I tell my kids all the time, “How do you know you don’t like Broccoli-Walnut-Cranberry Casserole Surprise*?  You’ve never even tried it before!”  Hey, self, how do you know you won’t like Uinta Cahoots Double Rye IPA?  You’ve never even tried it before!  If someone offers you a beer that sounds way out there or like something you would hate, give it a try … WITH AN OPEN MIND.  You never know what you may discover.

* I have never served anything like a Broccoli-Walnut-Cranberry Casserole Surprise to my children.  I doubt that such a dish exists.  No children were harmed in the filming of this episode.