Not one but TWO of the deliveries I received for the 40 Days of Beer Festival were a new one for me: Boulevard Sixth Glass.  Where have you been all my life??? 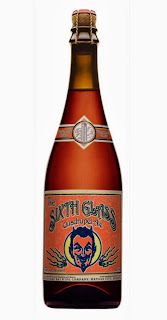 Thank you to GE (4-pack) and LG (750 mL bottle) for introducing me to this little bit of heaven in a bottle.  Boulevard is a brewery in Kansas City that brews a staggering variety of craft brews, from stouts and porters to IPAs to unfiltered wheats and everything in between.  (Shout out to the Boulevard folks for a fantastic website.  They provide information on the best glasses for each type of beer and suggested food pairings for each as well.  Kudos!)

For those who don’t know me, I gravitate toward dark, thick, rich, full-flavored beers.  I like Belgian Trappist-style beers especially (officially known as ‘Abbey-style’).  There are only 8 ‘official’ Trappist breweries in the world as recognized by the International Trappist Association (there is an association for EVERYthing!)  Six of those eight are in Belgium (with names you might recognize like Chimay and Westmalle), one in the Netherlands and one in Germany.  However, breweries around the world are beginning to brew more Abbey-style beers.  Boulevard is one such brewery, thank goodness.  (Stick around for our first post next week for more on Dubbels, Tripels and Quadrupels.)

Boulevard Sixth Glass is a quadrupel, which means it has a very rich and fantastic flavor; it is tremendously smooth; and it will knock you on your tail if you have more than one (10.5% ABV!) The name comes from a Hans Christian Andersen tale called, The Watchman of the Tower.  In describing what can be found in seven glasses, the main character says, “In the sixth glass sits the Devil himself; he is a little well-dressed man, most charming and pleasant. He understands you and agrees with everything you say.”  At 10.5% ABV and with such great flavor, this little beauty from Boulevard may truly be the devil!

Buy yourself a four-pack or a 750 mL bottle today.  And you’re welcome!