The story of Horned Owl Brewing is brought to you by the letter ‘P’: Patience. Persistence. Painstaking. Passion. 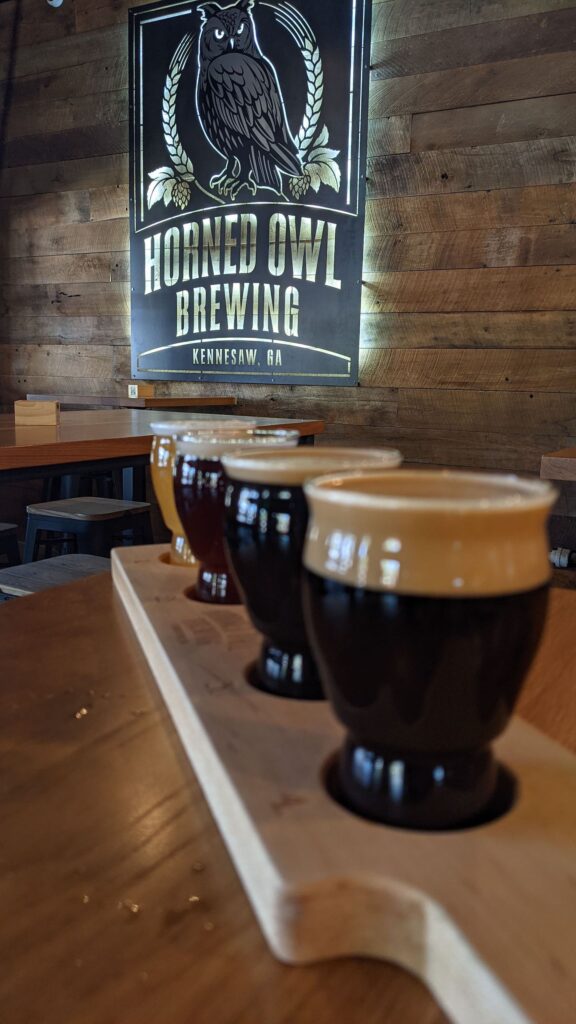 Joe Uhl was going to open a brewery north of Atlanta. Once he finally settled in on the location for the new spot on the square in Marietta, it was time to finalize the paperwork and get the deal rolling. Working with the city council and landowner, they were able to move the ball all the way down the field but just couldn’t quite get the ball over the goal line. So, he had to start from scratch.

And then he thought he had another location in Smyrna … no dice. And then it happened again. And again. Because of his background as the COO of a company that owns and operates restaurants and bars, Joe fully knew that it took a lot of patience and persistence. Those qualities ultimately led to this …

Fast forward to today. Horned Owl Brewing is a beautiful anchor in the brand new and booming entertainment district in Kennesaw. High ceilings, huge wooden beams, stonework in every direction – you get the feeling that an owl may swoop down and join you on the next stool while you’re there.

The servers were on point … sociable without being over-the-top and only too happy to talk about the beer there. I was mid-flight when they brought Joe over to make the intros. I was sucked in. Here’s a guy who has a very clear passion for what he does. After surviving all of the challenges to get this thing in the air, the pride bleeds out of him when he talks about the beer. (Pride – there’s another ‘p’ word for the day.) He watched how I held the glass and could tell that I was appreciative of the craft.

The product – all very high-quality and with a dizzying array of styles. This place has only been open since November and yet has twenty tap handles, including two dark beers on nitro. (Joe tells me they’ve had a few cask ales as well.) Of course, they make a lot of the standards these days: IPAs, hazies, stouts, lagers, wheat beers, etc. But what stood out to me was not only the presence of some oft-overlooked styles but the quality of them as well. Horned Owl has a Schwarzbier (Cover of Night), an ESB (Twoo), and a Weizenbock (Tawny.) I love these styles and hate that not many breweries offer them anymore. All three were so very well done. I 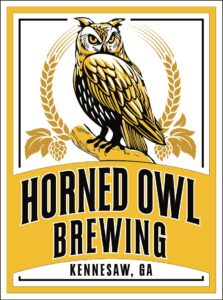 really can’t overstate how amazing it was to see such a massive diversity of styles and the quality beer delivered with each. Yeah – I’ll be back on South Main Street in Kennesaw again soon.

Fun fact: Yes – every beer name is owl-themed. I assumed that it was because of the nearby Kennesaw State University Owls. That may be part of it, but Joe’s last name is German for owl.

So, soar on over to Kennesaw and saddle up for some of Horned Owl’s finest. It’ll be a hoot. (Sorry.)

This is the next installment in, “15 Minutes With …”. These posts are designed to be more than just a brewery review. We will attempt to dig deeper and do more than simply tell you what sort of beer and food you can find at various places. We want to delve into the stories and anecdotes … those eccentricities, quirks, and oddities that make each brewery unique.

When you know, you know. Jessie and Kevin knew. You need to know, too.

Kevin and Jessie O’Brien haven’t known forever that they would one day open a brewery, but looking back it’s clear that this was destined to happen. Jessie has had a passion for craft beer for a long time, stemming from their time at the University of Maine. Kevin is naturally a people person. He is warm and engaging … he has an amazing ability to make you feel welcome with a smile and a genuine interest in conversation. Combine those two with Jessie’s drive to dive into the science of brewing and Kevin’s natural knack for marketing and management, and we have a winner!

I first contacted them about a week before my recent visit to Amelia Island/ Fernandina Beach, Florida. I had hoped to at least get the typical, “Yeah, come on by and we can chat” response. But what I got was a thoughtful welcome and some thoughts on some beers I should be trying. And right then I knew – this visit became the priority for the weekend. Spoiler alert: I was not disappointed at all.

First Love Brewing is pretty new to the scene, having opened in June 2020.
Yes – they opened in the middle of a global pandemic …
In an economy largely focused on tourism …

They were actually set to open in March, but we know how that turned out. I was particularly struck with the positivity and optimism Kevin displayed when talking about that situation. “That was great for us, because it gave us more time – it was almost like we had a three-month soft opening.” Lemons –> lemonade.

Enough of the background … how was the product? I was ‘only’ able to try 11 of the beers they had on tap. 😁 One thing really stuck out to me looking at their lineup: no sours and no hazy IPAs. It seems a lot of breweries these days focus almost all of their attention on just those two styles. It makes sense, because that’s the crazy-fad-trend right now. First Love has light, dark, Belgian, light & crisp, heavy and complex. And amazingly enough, for a brewery barely in its infancy, everything I had was quite good. And I’m not just being nice. Everything was legit good. A dubbel, tripel, saison, red IPA, Baltic porter, rye amber …. the variety of styles and quality of the beer was truly astonishing. I guess those brewing science courses at Auburn University and Level III Cicerone training are working pretty well for Jessie!

Do not sleep on First Love. They have big plans. The beer is taproom only … for now. Back to the aforementioned timing of the opening – this brewery opened against seemingly all odds, and has been successful despite the challenges. According to Kevin, they have received amazing and consistent support from the community … the people they live with and serve every day. Just wait until the world starts traveling again. Community is what they’re all about. I’m going to straight up steal a line from their website:

First Love Brewing is built around the idea of pursuing your passions and dreams. We are driven by the people we meet, the community that we live in, and the places we visit. 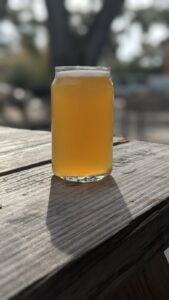 Community – that’s obviously what they are supporting. But what they may not even realize yet is … they’re building community too. Their flight paddle (pictured above) is shaped like Amelia Island. They’ll place your beers in the order you should drink them for the best experience. (Drink from north to south for optimal results.)  And they have a solid menu, too. This is not a ‘grab-a-pint-and-go’ sorta place. Sit, eat, sip, enjoy. COMMUNITY. The detail that goes into every aspect of the operation just screams that this is designed to be a piece of the Fernandina fabric for a very long time to come. I mean, they trained under a master pizza-dude in Chicago; they import their flour from Italy. The pizza is unbelievable. The beer is amazing. The people are genuine and authentically friendly. Now I know.

Again, when you know, you know. And now you know, too.

This is the first installment in a new segment entitled, “15 Minutes With …”. These posts are designed to be more than just a brewery review. We will attempt to dig deeper and do more than simply tell you what sort of beer and food you can find at various places. We want to delve into the stories and anecdotes … those eccentricities, quirks, and oddities that make each brewery unique.