Reinheitsgebot – does it still make sense? 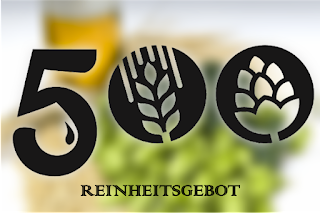 If that title makes you say “Gesundheit” – I wasn’t sneezing, I’m talking about the German Beer Purity Law. If you don’t already know what it is, it’s a 502-year old law that only allows for four ingredients in the production of a beer: water, barley (or malt), hops, and yeast. Beer brewed in Germany must have nothing else in it.

This law was first created to protect citizens from beer that may have included toxic ingredients that were causing sickness and even death. (Delicious stuff, like wood shavings, nightshade, poisonous tree roots, etc.) The law worked and continues to still today. Having attended a very authentic German Oktoberfest celebration, the quality of the ingredients led to no nasty side effects of excess indulgence the next morning. So, it definitely has its advantages.

On the other hand, US brewers are quick to throw just about anything into a beer in an effort to create recognition and break new flavor barriers. Chocolate, every fruit imaginable, pizza, bacon, smoke, wads of cash, habanero … basically anything. It would seem that German brewers and US brewers are on different sides of the aisle.

Side note: German brewers ARE starting to brew with crazy ingredients and bowing to the pressures of craft beer enthusiasts. But there’s a catch … they cannot refer to the final product as beer. They have to market it as “mixed beer drinks” (Biermischgetränke). And as it turns out, Germans are choosing to stay with the traditional beers, leaving the ‘mixed drinks’ for visitors and tourists.

I attended a Beer Bloggers Conference last week and was able to hear from the founder and CEO of Dogfish Head, Sam Calagione. He said that DFH’s stance was to almost fly in the face of the half-millennium old Reinheitsgebot … focusing on bringing in flavors that you wouldn’t expect in beer. They took a lot of arrows, especially when they were doing this in the years before craft’s big boom in the US. Once told, “Fruit belongs in a salad, not in your beer, a**hole,” Sam and the team ventured on, believing in what they were creating. They now stand as one of the preeminent craft brewers in the world … and have not changed that stance. (Read an article by Sam himself on what he calls ‘beer censorship.’)

Listening to the presentation, I found myself torn. Part of me was in love with the nostalgia and the quality borne of the Reinheitsgebot. And part of me was excited about the almost brash nature with which Dogfish Head eschewed it. Which was right? Who was right and who was wrong?

After a few days of reflection, something amazing occurred to me. What if they’re both right? We don’t have to live in a binary society where there has to be a yin and a yang; an up and a down; a hero and his foil. Isn’t the world a better place because of the variety that we have these days? I love that I can go to Germany and order a traditional lager with only those four magical ingredients. But why shouldn’t I be able to slide down the road and have a “mixed beer drink” that includes coriander and orange peel? And then I can fly home and have Terrapin’s Raspberry Truffle Wake-n-Bake Coffee Oatmeal Imperial Stout!

So, who’s right? The German purists or the Dogfish Heads of the world? If you ask me, the answer is yes.