We hope you enjoyed our first trip to Asheville last week with a tour through Wicked Weed.  While on the same trip, two of us ventured over to the Asheville River Arts District. Yes, we looked at the art.  No, we didn’t buy anything.  But while there we found a brewery no on the normal tourist stops.  This was the local hangout, and it was PACKED on a Friday night!  It was hard to find somewhere to stand and there were lines to get the beer.  It was so very worth it … 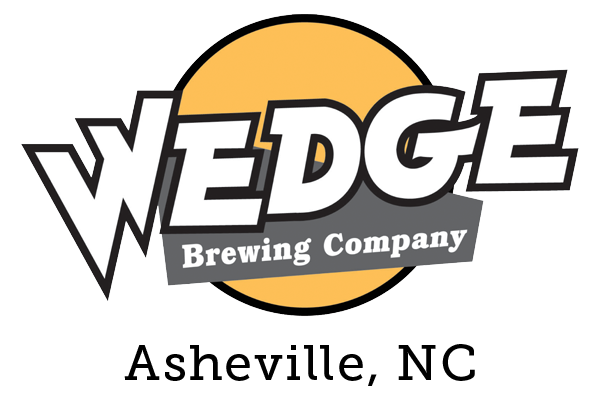 Wedge Brewing Company sits in the middle of the arts district, right next to the railroad.  Gravel/dirt parking lot, very small indoor seating area, very vibrant scene, very good beer.  For a relatively small retail side of the building, there is a robust selection of beers, ranging from the mild all the way to the off-the-charts bitter. Baskets of roasted peanuts and a rotation of food trucks complement the eclectic scene.

On the standard regular, good ole beer side, I highly recommend the Julian Price Pilsner. Simply a Golem Belgian Strong Golden which was outstanding.  Thicker than you might usually expect from something with so light a color.  It could be too sweet for some people, but it even has a little bit of spice to it.  It’s something you have to keep working on to really pinpoint what’s going on in the glass.  Some of us may even need a second one to decide!
very nice, crisp pilsner.  From that, I took the huge leap over to the

Insider tip: there is a window just to the left of the entrance where you can usually go and order their Iron Rail IPA (probably their most popular) and a second choice.  While we were there, it was the 3rd Rail Imperial IPA Barley Wine (this is the aforementioned off-the-charts bitter selection.  Wow.)

FYI – those who know me are aware of the fact that I’m not big on IPAs typically, but this Iron Rail was quite good.  Less bitter than some others I’ve had and really quite drinkable.  Maybe it was better because I got it from that super-secret side door and felt like a local pro.  Who knows?  Anywho, when you’re in Asheville, go and check out the local arts scene, and plan some time to sample some of the finest local concoctions – served in pint glasses.

Next wek is the 3rd installment … been there, done that, bought the t-shirt.