I’t been two months since I’ve posted.  I’ve missed you guys.  And since it’s been so long, I figure I owe you some extra content today … our Beer of the Week will be BeerS of the week. 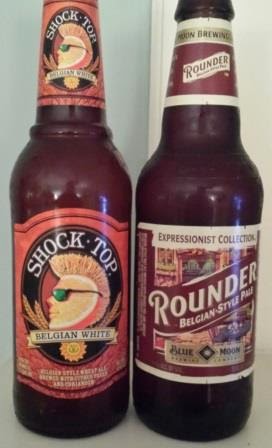 First is a Belgian White beer or witbier.  Shock Top Belgian White is something you’ve probably all tried before.  But let me submit that you’re probably not drinking it correctly.  Raise your hand if you feel cultured and sophisticated for asking for a slice of orange with your Shock Top.  I’ll kindly ask you to stop.  It’s already brewed with THREE types of citrus, and to this reviewer it has an almost syrupy sweet flavor because of that fruit addition.  Why would you add even more??  It is a good beer … unfiltered, relatively smooth, very drinkable.  But I cannot have more than 2-3 at a sitting, because it just feels too heavy for me.

Next is a new beer from Blue Moon’s “Expressionist” collection.  Blue Moon will tell you that this is a unique take on a classic style.  This is an exceptionally smooth beer, almost to the point of feeling flat.  That is not a knock in my book.  It’s heightened maltiness gives it that rich, smooth texture.  A Belgian pale was a popular style in the 1940s but has been largely forgotten until recently.  Pale ales are traditionally somewhat bitter, but the Belgian pales are not.  Orval is probably the best known in this category, but this Blue Moon Rounder is a solid and easier-to-find selection as well.  Just like Shock Top above – not sure I could have more than a few at one sitting.  It’s still syrupy and heavy to me.

Two good beers.  Not great … just good.  But a reminder, these breweries create their beers to be absolutely fine on their own.  Don’t worry about adding extra flavors to them.  (Unless it’s a Mexican beer with lime – something just WORKS with that.)